Vulnerable
How We're Helping to Save the African Leopard

African leopards are restricted to almost entirely within sub-Saharan Africa, after being mostly extirpated from northern Africa. Their range has contracted by 30% in the last 20 years, driven by declines in the availability of prey, land-use changes, human-wildlife conflict, and poaching. Of the threats that leopards face, human-wildlife conflict is thought to be the most significant cause of direct mortality. San Diego Zoo Wildlife Alliance's Science team is focused on conserving leopards by mitigating leopard-livestock conflict with local pastoralist communities. SDZWA works directly with communities and conservancies in northern Kenya, with the objective of assessing the range, density and status of leopards, as well as developing local, adaptive management plans to improve human-leopard coexistence. The goal is to identify conservation solutions that are effective in northern Kenya and generalizable to the entire leopard range.

In many areas in Africa, there is no information on leopard population size, which challenges meaningful conservation efforts. At a fundamental level, determining whether conservation measures are effective requires monitoring and tracking leopard populations. Population Sustainability at SDZWA is tracking leopard through a variety of methods, including: remote cameras, genetic sampling, citizen science, and GPS collars. The goal is to understand the mechanisms that drive leopard-livestock conflict, and assess the efficacy of management decisions aimed at mitigating conflict.

SDZWA is committed to collaboration with communities, recognizing that protection of leopards is dependent on local engagement to address the threats that leopards face. Community Engagement at SDZWA is leading the collection of data from communities on their perceptions of benefits and risks of living with leopards, as well as documenting livestock losses, so that conflict events can be tracked, and hopefully reduced, over time. By building strong partnerships with communities, SDZWA is creating culturally relevant conservation management plans to secure sustainable populations of leopards in northern Kenya. 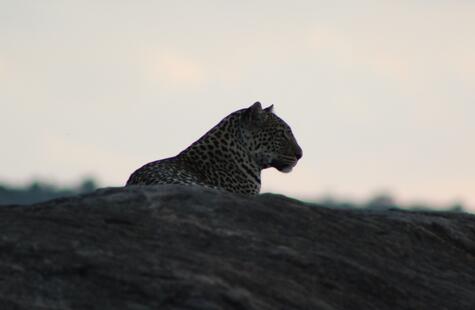 Here I am with the Uhifadhi Wa Chui field team, experienced Samburu trackers, staring at the trunk of a Boscia tree, punctiliously looking for scratches that would indicate that yes, a leopard was here. But then immediately follows the questions in my mind: “Why? What was the cat doing...