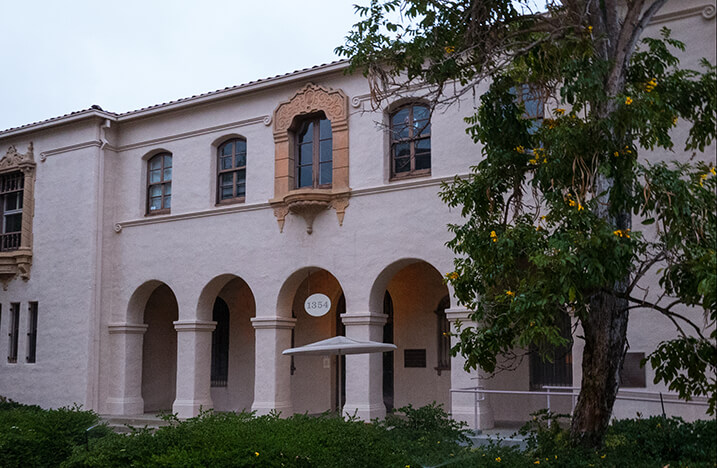 In 1926, Ellen Browning Scripps donated $50,000 to finance the construction of the two-story, 8,300-square foot Scripps Building, original home of San Diego Zoo’s Hospital and research programs. National Science Foundation grants were obtained to modify and upgrade the labs in 1962 and then again in the mid-1990s. In 2008, the Scripps Building became the newly renovated site of the Zoo's Disease Investigations team. Here, our staff carries out disease investigations and postmortem disease surveillance for animals at the San Diego Zoo, Safari Park, and our field conservation programs. Additionally, the Scripps Building houses our museum-accredited Pathology Archives and Histology Laboratory, as well as serving as the administrative center for our Amphibian Disease Laboratory. It contains a veterinary student and pathology resident training center equipped with multi-headed photomicroscopes for teaching purposes, and has been designated as a study center for the Charles Louis Davis Foundation for Veterinary Pathology. The Scripps Building also serves as home to the Life Sciences and Curatorial departments of San Diego Zoo Wildlife Alliance. 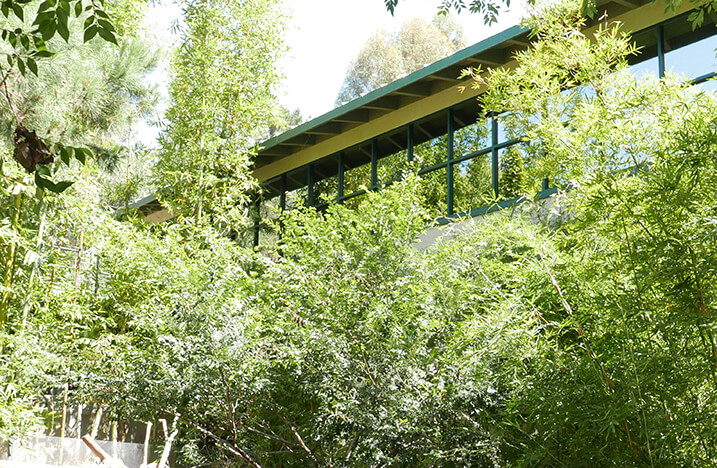 Inspired by an experience viewing our first born giant panda cub, Hua Mei, an anonymous supporter made a large donation to our giant panda programs, providing the support we needed to construct the Giant Panda Research Station. This research facility, located in the heart of the San Diego Zoo, serves as a hub for giant panda conservation work and husbandry activities, and provides critical space adjacent to our bear enclosures for researchers and wildlife care staff to develop and implement collaborative approaches to the conservation of giant pandas and other bear species. The facility was completed in 2001 and included the construction of new habitats for the giant pandas, lab space for researchers, and operational space for wildlife care staff. A conference room on the second floor has an unobstructed yet unobtrusive view of the giant pandas, proving an essential and inspiring meeting space for the Giant Panda Team and others from San Diego Zoo Wildlife Alliance. 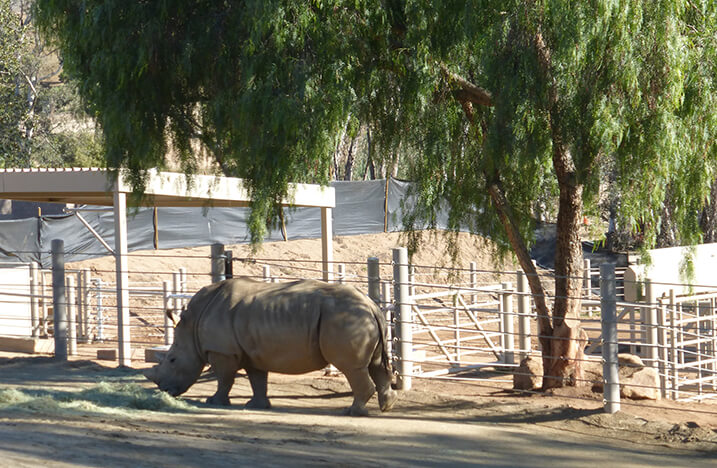 With only two northern white rhinos remaining in the world by end of 2015, San Diego Zoo Wildlife Alliance committed to bringing this species back from the brink of extinction through the use of assisted reproductive and genetic technologies. To accomplish this, the former black rhino habitat at the Safari Park began its transformation into the Rhino Rescue Center. The construction of new outdoor areas was completed in early fall 2015, and the first residents of the Rhino Rescue Center, six female southern white rhinos, arrived from South Africa soon thereafter. Here, an interdisciplinary team including wildlife care and veterinary staff, along with reproductive physiologists and geneticists, are working with southern white rhinos as a model for developing advanced reproductive technologies to establish a sustainable population of northern white rhinos using banked genetic material from the Frozen Zoo®. The three-acre facility, designed to house up to a dozen white rhinos was completed in early 2016, and includes a climate controlled indoor area and maternity stall, a field lab for researchers and wildlife care staff, a state of the art rhino training transfer area, and habitat space where the rhinos can be viewed from the Africa tram. 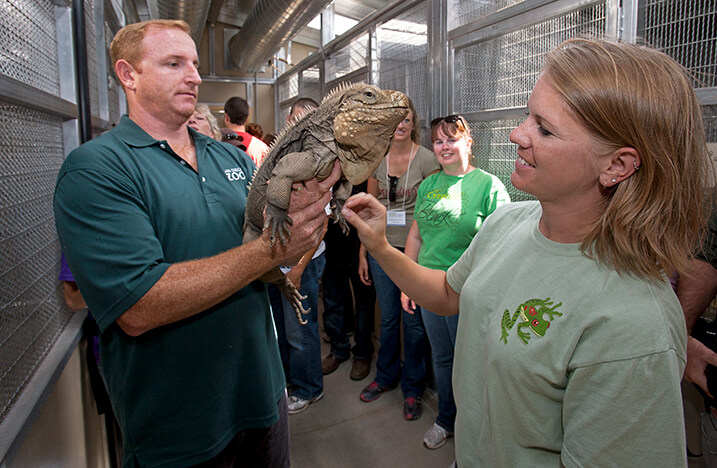 In 2008, our Caribbean rock iguana breeding program moved to the newly constructed Griffin Reptile Conservation Center at the San Diego Zoo Safari Park. The $600,000, 3,500-square foot facility was funded by a matching donation from Kenneth C. and Anne D. Griffin. This gift enabled construction of a dedicated center for propagation and conservation of rock iguanas, considered the world’s most endangered lizards. It holds 20 adults and up to 20 hatchlings and juveniles of four iguana species, including the Grand Cayman blue iguana, Jamaican iguana, Anegada iguana, and Cuban iguana. The facility is equipped with heated enclosures that maintain high humidity, and skylights and windows constructed of ultraviolet light-transmitting materials. Indoor habitats are joined via sliding doors for separating and pairing animals, with separate outdoor areas. Each indoor/outdoor habitat is planted with native Caribbean plants and filled with three feet of soil for burrow construction and nesting. Since its construction, it has become the first facility to reproduce the three most endangered lizards in the world. We have completed projects on egg incubation, hormone-behavior interactions, and stable isotope diet studies. Additional research on nesting behavior, salivary hormones, and sperm cryopreservation and artificial insemination are planned. 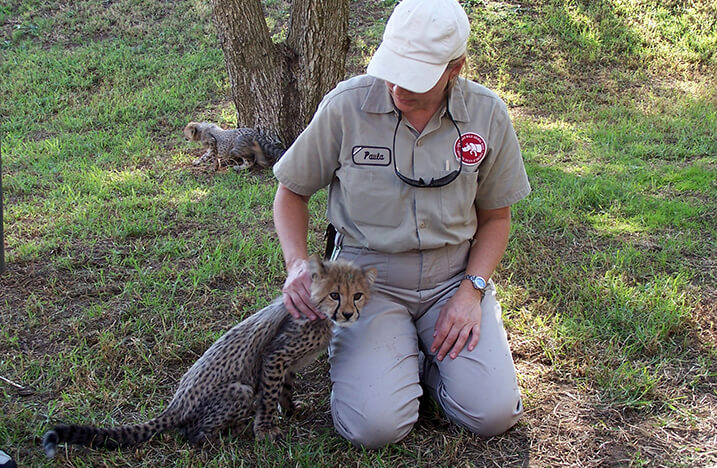 In 1970, construction was completed on the Cheetah Research and Breeding Center, an 8-acre facility with 17 habitats that mimic African savannah habitats. This area was built on the grounds of the San Diego Zoo Safari Park to house our population of African cheetahs. The work of the center is focused on understanding the complexities of cheetah reproductive biology and maximizing our breeding efforts with this vulnerable species. A diverse team of researchers from Population Sustainability and Reproductive Sciences, along with curators and wildlife care staff, work together to investigate behaviors specific to reproduction, with an emphasis on wildlife communication and endocrinology. Our ongoing efforts here form an integral part of the National Cheetah Breeding Center Coalition, a multi-institutional endeavor that enables the exchange of genetically valuable individuals in order to create a sustainable cheetah population and help alleviate the threat of extinction. 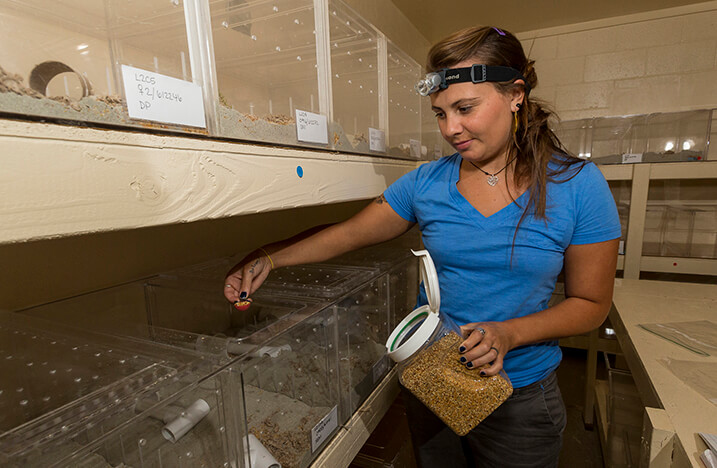 The Pocket Mouse Conservation Breeding Facility is designed to house up to 250 Pacific pocket mice and their offspring in a dedicated 700-square-foot building located in a remote area of the San Diego Zoo Safari Park. The chosen site was the original home of the Infant Isolation Unit that served as a nursery to hand raise delicate and sensitive hoofstock species up until 2001. In 2011, we were awarded $45,000 from the California Department of Fish and Wildlife to remodel the building to accommodate a group of Pacific pocket mice captured in an emergency rescue effort. Here, our Recovery Ecology staff carry out breeding, behavioral observations, and ecological studies to optimize the environment so that it supports healthy, behaviorally competent mice that are well prepared for reintroduction. 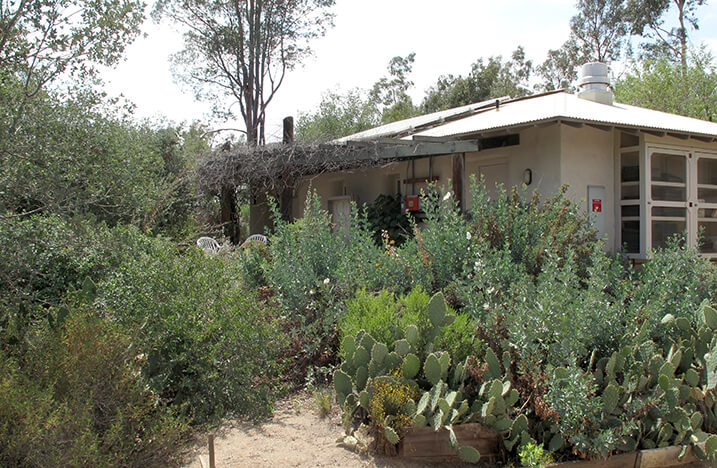 The Botanical Conservation Center consists of an 880-square-foot straw bale building, a straw bale-wrapped sea container, and a 663-square foot nursery. Built in 2000, the straw bale building was the first permitted straw bale structure in the City of San Diego. Built largely with the help of volunteers, the building consists of 240 straw bales and serves as a demonstration project for others interested in this unique type of construction. Repurposed from agricultural waste, straw bales are a green construction material and are also highly energy efficient, providing excellent insulation. Critical to the functions of the Native Plant Seed Bank, the main building houses seed processing equipment that allows native seeds to be dried and stored for long-term conservation. The adjacent sea container serves as a cold room where the drying process for seeds collected in the field begins. The sea container, well insulated and outfitted with an air conditioning, was designed as a low-expense seed processing setup that might be duplicated by institutions in developing countries. Our Plant Conservation team uses the nursery space at the Botanical Conservation Center primarily for propagation of rare, threatened, and endangered plant species in our care.