Vulnerable
How We're Helping to Save the Cheetah

Threats to Survival: Habitat and prey base loss; human-cheetah conflict

San Diego Zoo Wildlife Alliance has a long history with the African cheetah. For almost 30 years, these extraordinary cats have been part of a breeding program to produce offspring from genetically valuable individuals to bolster cheetah populations. While over 130 cubs have been produced at the Safari Park, challenges associated with the cheetah’s unique reproductive biology have remained hurdles to achieving a sustainable zoo-based population of cheetahs. Cheetah females often fail to exhibit normal estrous cycles. Our Reproductive Sciences researchers have used hormonal stimulation to produce 16 cubs from previously non-cycling females. They diagnose pregnancy using ultrasound and use thermal imaging to visualize growing fetuses through the detection of heat signatures on the females’ abdomens. In addition, 6 males have been trained for non-invasive semen collection, allowing us to optimize cryopreservation techniques.

Traditional systematic behavioral observations and in-depth examination of cheetah vocal communication has given our Population Sustainability research team key insights into cheetah reproduction. Examination of vocal repertoires revealed that one call, the male specific stutterbark, is associated with increased levels of female reproductive hormones. Studies undertaken during breeding trials at the San Diego Zoo Safari Park have allowed us to record these stutterbark calls, which we have subsequently used in playback experiments. Broadcasting stutterbark recordings via loudspeaker prior to introductions of males and females has elicited stutterbarking from the majority of males in the collection and also resulted in positive changes in female sexual behavior, including rolling, tail flicking, and seeking proximity to males. As a result, recent breeding trials have resulted in more successful breeding attempts, higher levels of involvement by inexperienced females, and ultimately full term pregnancies and births.

Birth of a National Coalition

Despite San Diego Zoo Wildlife Alliance’s historic success with cheetah breeding, recent collaborative work with our partners has revealed that our collective breeding numbers are falling short. As a result, we have become a key participant in the national Cheetah Breeding Center Coalition, whose goals are to create a sustainable cheetah population in order to prevent extinction of the world’s fastest land mammal. Comprising 9 breeding facilities and over 100 additional institutions with cheetah collections, the coalition seeks to establish a sustainable zoo population of cheetahs within the next 10 years. To achieve this goal, our target is to produce 15 cheetah cub litters across the country every year. Such efforts will enable us to shift our focus from species survival to species sustainability. The African cheetah is the first endangered species to undergo multi-institutional efforts of this magnitude in order to ensure the potential for future reintroduction back into the wild. 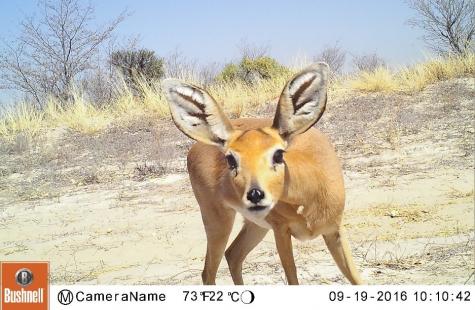 Botswana has an extensive protected area network, and these areas are rich in wildlife abundance and diversity. However, less is known about the wildlife diversity in non-protected areas. As any farmer in Botswana can tell you, there still exists a wide range of species that are co-existing...