Extinct in the wild
How We're Helping to Save the 'Alala

Since 1996, we have bred the critically endangered ‘alala (or Hawaiian crow) at the Keauhou and Maui Bird Conservation Centers. Our Recovery Ecology team monitors breeding activity using remote cameras, removes eggs from nests for artificial incubation, and hand-rears nestlings. Artificial incubation and hand-rearing often results in greater hatching and fledging success, particularly because some females do not incubate their eggs or feed their nestlings properly. Also, removal of eggs for artificial incubation often triggers females to lay an additional clutch, thereby doubling the breeding potential of the species. This intensive management has resulted in an increase in the population from fewer than 20 birds in the late 1990s to 114 birds today. Now that ‘alala have been saved from the brink of extinction, we will be releasing them into the wilderness in collaboration with our partners.

Preparing for Releases to the Wilderness

In preparation for releasing birds into the wilderness, we are developing parent-rearing and cross-fostering techniques. In 2014, we facilitated the first successful rearing of an ‘alala offspring by both of its parents under human care. This technique enabled us to collect valuable information about parental behavior as well as nestling growth and development, preparing us for the day when nests are managed in the wild.

Our Conservation Genetics team completed the first population genetics study, examining nearly 20 years of ‘alala breeding data. We determined that the degree to which an individual is inbred has a strong negative association with survival at the embryo and nestling stages and that offspring survival is improved by a longer duration of parental incubation. We are researching additional methods of determining pairings that will limit inbreeding, and implementing parent rearing protocols. Our Reproductive Sciences team is collecting semen samples from a single male at the San Diego Zoo Safari Park. This bird is genetically valuable, yet has species identity problems that inhibit him from mating naturally. By refining sperm collection and storage techniques, we hope to be able to ensure his future genetic representation through artificial insemination. 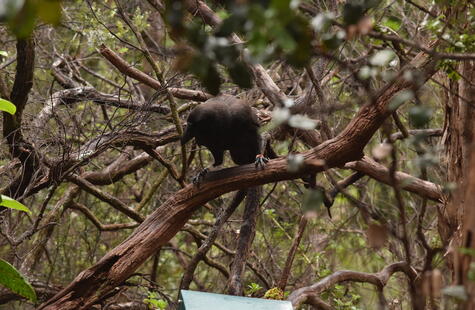 Science Blog
The pros and cons of offering supplemental food: important decisions for the next stage of ‘alalā reintroductions

Every morning for nearly the past 3 years, San Diego Zoo Global (SDZG) field team members and our partners trek into the Hawaiian forest to put out food for one of the island’s rarest inhabitants and one of the world’s rarest birds.

Regardless of whether the team is...