Vulnerable
How We're Helping to Save the Desert Tortoise

A Center for Tortoise Conservation

Our conservation program with the desert tortoise began in 2009, when, at the request of our partners, we took responsibility for managing the Desert Tortoise Conservation Center near Las Vegas, Nevada. The center contributed to recovery of the tortoise through collaborative research, conservation, training, and education. Until its closure in 2014, the center rescued, cared for, and released more than 2,700 tortoises at six sites. These animals served a crucial role in supplementing wild desert tortoise populations. Research led by our Recovery Ecology team identified the key factors influencing successful reintroduction of tortoises, helping to improve release protocols. Other research examined predator evasion strategies, foraging behavior, individual characteristics, and the importance of critical resources, such as burrows, for tortoise survival. As part of this work, our Reproductive Sciences researchers have developed protocols for non-invasive sexing of young juveniles.

Removing Disease as a Roadblock

Disease problems have long been an obstacle to desert tortoise recovery. In the Mojave Desert, tortoise populations were declining, with many individuals showing evidence of upper respiratory tract disease. Concern over the spread of the disease was interfering with urgently needed translocations to move tortoises out of the way of solar energy developments. In order to address this problem, our Disease Investigations team took a multi-pronged approach. First, we provided evidence that existing diagnostic testing protocols were not accomplishing the goal of preventing movement of infected tortoises. Second, we launched a rapid response to identify all of the disease agents of concern in desert tortoises so we could understand upper respiratory tract disease in the broader context of overall population health. Finally, we organized a disease risk assessment workshop to review the available disease data, assess and prioritize the risks associated with each disease agent, and develop efficient and effective disease risk mitigation strategies that will allow tortoise translocations to proceed.

Hope for a Brighter Future

Long-term monitoring of released tortoises is underway, as well as new projects identifying critical habitat features and studying the impacts of solar power facilities. The goal of this work is to mitigate the effects of green energy on tortoises and assist in the development of optimal habitat restoration plans. To achieve, this we attach appropriately-sized radios to tortoises of all ages and track their movements, reproductive success, survival, and body condition over time. Gaining a better understanding of the relationship between tortoises and their habitats will allow us to help prioritize areas for preservation and set goals for restoration of degraded lands. 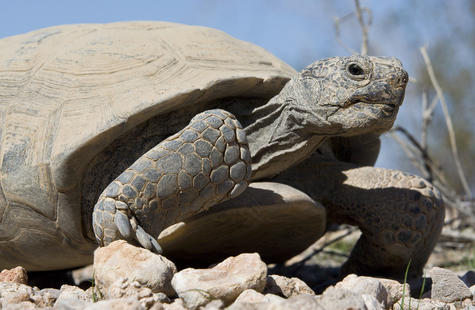 Desert tortoises are a long-lived species inhabiting the Mojave Desert. They take years to reach adult size and maturity and much about them is slower paced than in many mammalian species – although they are quicker on their feet than you might think! They are adapted to living in a desert...