Threatened
How We're Helping to Save the San Diego Thornmint

Although it is considered to be a rare plant, the San Diego thornmint has a large number of occurrences in San Diego County, some with tens of thousands of plants. However, these numbers can be deceiving, with great fluctuations year to year. Furthermore, the populations have become isolated and each faces a plethora of threats, including a decline in genetic diversity resulting from their isolation. Under the leadership of our partners, land managers in San Diego County have come together to manage the San Diego thornmint throughout the region collectively and adaptively. Our Plant Conservation team is gathering key information on thornmint biology to help inform and ensure the success of regional management strategies, including contributing to population monitoring, and conducting research. We conducted a common garden experiment in which seeds from different sites were grown under the same conditions in order to test whether differences in seasonality and morphology between populations are genetic or are the result of individual plants responding to their environment. We found that differences in the timing of flowering, plant height, and response to increased watering appear to be genetic. This work helps give land managers a better idea of the degree of similarity among populations and whether it would be appropriate to enhance one population with seed from another.

Seeds in the Bank

Results of the experimental and genetic studies have justified the need to better represent all San Diego thornmint populations in conservation seed banks. Seeds remaining from the common garden experiment have been added to our Native Plant Seed Bank, where they serve as an insurance policy against extinction. Still, more populations need to be conserved in order to better capture the genetic diversity of the species. Our long-term goal is to ensure that there is seed available to enhance populations needing it most without diluting the genetic differences that promote critical adaptations to specific environments. We are working with regional partners to ensure seed is collected both for immediate use by managers and for long-term conservation.

In addition to long-term conservation as insurance against catastrophic loss, our seed collections are a resource for land managers aiming to enhance or restore wild populations. We “bulk” seed, or use seed we have collected in the wild to grow out plants for maximum seed production, greatly increasing the amount of seed available. The results of this seed bulking effort will support a restoration project being conducted by Mission Trails Regional Park Foundation and the City of San Diego Parks and Recreation to boost their San Diego thornmint populations. As the land managers of San Diego come together to develop a management plan for this special annual, we will be doing more of this work, helping provide appropriate seed to other land managers. 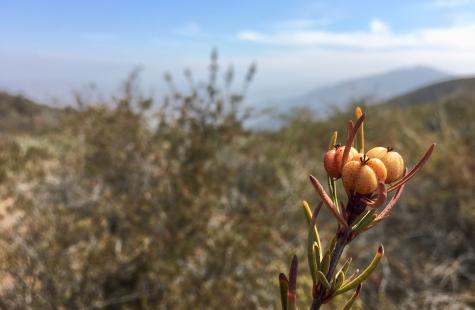 I hate ticks. I suppose I don’t actually hate an entire order of arachnids, but I think we can all agree that the idea of being fed upon is unpleasant, to say the least. There is a trail we’ve been using this year that is home to, presumably, thousands of ticks. Lightly brush against...