Endangered
How We're Helping to Save the Short-leaved Dudleya

A petite succulent, short-leaved dudleya is easy to overlook, blending in with the iron-bearing pebbles that dot its habitat. It’s a pleasant surprise to find the plump stems and bright white flowers, but its cryptic nature puts it at risk from trampling, and its small stature calls for careful seed collecting. Following Center for Plant Conservation’s guidelines, we limit our collection to ten percent of the seed produced by any one individual in a given year. With short-leaved dudleya, that means getting on hands and knees to carefully snip single, or even partial, flowers away from their outstretched flowering stalk. The seed from each mother plant is kept together, as one maternal line, which is tracked through the seed cleaning and freezing process at the Native Plant Seed Bank. The team works hard to capture the full genetic diversity of a population, collecting from individuals throughout the population and from all sizes and shapes of mother plants. Tracking maternal lines allows this diversity to be maintained when the seed is eventually used for conservation purposes.

Short-leaved dudleya exists in only five locations on the planet, centered around the central coast of San Diego County. Only two of these locations support large populations, while one of the populations has been reduced to fewer than 50 individuals. In 2016, the Plant Conservation team began growing seed from this small, imperiled population in the Botanical Conservation Center nursery, hoping to produce copious seeds for reintroductions. However, the team soon realized that while propagating plants from the wild collected seed was rather straightforward, there were issues with the next generation seed that should be further researched. Fortunately, as a perennial with a long-lived root structure (corm), short-leaved dudleya might be reintroduced more effectively by planting dormant corms. The team’s propagation efforts are now focused on maintaining the adult corms ready for reintroduction.

The team’s first reintroduction effort with short-leaved dudleya occurred at Torrey Pines State Park, where one of the smallest populations is located. The corms, just a few inches long, were placed into small holes drilled into the hard sandstone, which were then back-filled with soil and water. Outplanting had never been attempted before, and the best practices were unclear, so it was done experimentally. We measured the size of the reintroduced corms prior to planting, and numbered them. We randomly planted both small and large corms along two different transects to see if corm size effected success. To help us monitor the buried treasures, small radio identifiers were also buried just below the soil surface next to each corm, emitting a signal with the plant’s unique ID. Data from this experiment will help improve future outplantings of this special plant.

Digging Into the Genome

With five isolated populations growing in a matrix of housing and commercial development, the level of gene flow between the populations is unknown and of concern. It is unclear whether pollinators are transferring genetic information among the five populations, and while the populations may be adapting to their specific habitats, important genes may be lost as they become increasingly isolated. A high level of genetic diversity might be important as the plants face an increasingly erratic and changing climate. To examine the genetic health of the species, Plant Conservation’s Postdoctoral Fellow, along with the Conservation Genetics team will be examining its population genetics, using a genomic approach. 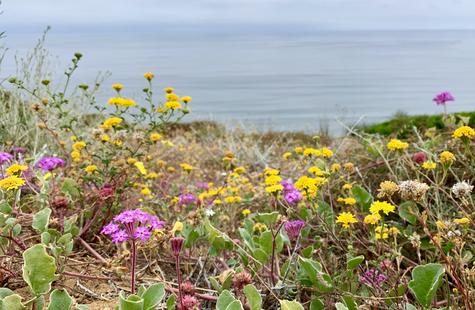 We’ve all heard that San Diego is a global “hotspot” of plant and animal diversity, but why has this come to be? How did all these species get here?

In discussing many of the rare plant species that we’ve targeted for conservation seed collections, I’ve...