Endangered
How We're Helping to Save the Tasmanian Devil

A Key Partnership for Devil Conservation

San Diego Zoo Wildlife Alliance is sponsoring a postdoctoral fellowship at the University of Sydney focused on Tasmanian devil genetics.  Using next-generation techniques, this project is comparing the diversity of devils in zoos and breeding facilities throughout Australia with their counterparts in the wilderness. As part of the project, genomic regions involved in immunity, reproduction, growth, and behavior are being sequenced.  This genetic information will be integrated into the management of populations to ensure the overall genetic health of the species.  The gut microbiomes of devils are also being studied to better understand the potential impact of intensive management on endemic microflora.  This collaborative project is developing the first landscape-scale management plan designed to save Tasmanian devils in the wilderness by applying laboratory conservation work directly to the field.

In an attempt to increase post-release survival, our Recovery Ecology team is testing ways of dampening dispersal of released devils when they are first returned to the wild. To reduce aggression and encourage settlement, we are working on methods to introduce wild devils to newly released animals by familiarizing them with the scent of their scat.  To date, 28 devils have been released on Maria Island and 20 in Narawntapu National Park.  An experimental vaccine developed for facial tumor disease is currently undergoing testing and evaluation. 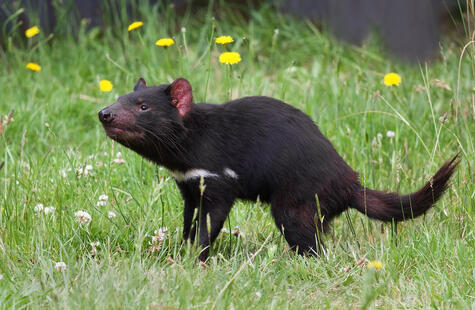 Infectious diseases often do not drive populations to extinction, rather reduce and isolate wildlife so that they are vulnerable to other factors. This is what we are now learning about the fatal, contagious cancer of Tasmanian devils called Devil Facial Tumor Disease (DFTD).